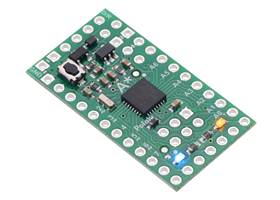 This version has a 5 V regulator that can be powered from 5.5 V to 15 V, and it features a 16 MHz resonator, which matches the voltage and clock speed of the Arduino Uno. It can be distinguished from other versions by its blue power LED: