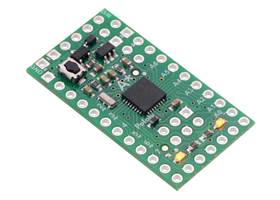 Introductory special: just $3.87 each! Must use coupon code AS328PBINTRO, limited to first 100 customers. Our initial stock is limited, so we are restricting shipments to 5 units per customer, but the introductory coupon has no quantity limit, and you can order more than five at that price if you would like. Backordered units are likely to ship within a few weeks.

This version has a 3.3 V regulator that can be powered from 3.8 V to 15 V, and it features a 12 MHz resonator. It can be distinguished from other versions by its yellow power LED: