The A-Star 32U4 Mini SV is a programmable module based on the ATmega32U4 from Microchip (formerly Atmel). Unlike competing products, it has an on-board switching step-down regulator that allows it to be powered efficiently from a 5 V to 40 V supply. 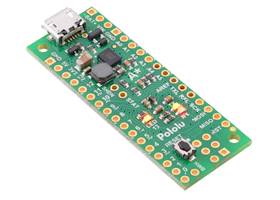 Typical efficiency of the regulator on the A-St...

Typical dropout voltage of the 5V regulator on ...

The Pololu A-Star 32U4 Mini boards are general-purpose programmable modules based on the ATmega32U4 AVR microcontroller from Microchip (formerly Atmel), which has 32 KB of flash program memory, 2.5 KB of RAM, and built-in USB functionality. The A-Star (abbreviated A*) adds a number of onboard features to support the microcontroller and make it easier to work with, including a 16 MHz crystal, a USB Micro-B connector, an in-system programming (ISP) header, a reset button, and three indicator LEDs.

Each A-Star 32U4 Mini contains a switching regulator that efficiently produces 5 V from an external voltage source to power the microcontroller. Three different versions are available, covering a wide range of input voltages:

A robust power selection circuit enables seamless transitions between regulator power and USB power, and overcurrent and reverse-voltage protection help safeguard the board against accidental damage.

All 26 general-purpose I/O lines on the ATmega32U4 are accessible on the A* 32U4 Mini; 7 of these are usable as PWM outputs and 12 are usable as analogue inputs. The board measures 1.9″ × 0.7″, the same size as an Arduino Micro, and features a pair of mounting holes sized for #2 or M2 screws (not included). Its 0.1″ pin spacing makes the A* easy to use with solderless breadboards, perfboards, and 0.1″-pitch connectors.

This version, the A-Star Mini SV, can be powered from a 5 V to 40 V external source. The input voltage is regulated to 5 V by an 800 mA ISL85418 switching step-down (buck) converter from Renesas (which acquired Intersil). (We also make standalone regulators based on the 500 mA and 1 A versions of this integrated circuit.)

As shown in the left graph below, the SV’s switching regulator has an efficiency – defined as (Power out)/(Power in) – of 80% to 95% for most combinations of input voltage and load.

Typical dropout voltage of the 5V regulator on the A-Star 32U4 Mini SV (newer ac02f version).

This newer version (ac02f) of the A-Star 32U4 Mini SV replaces the original version (ac02c). The new version uses an improved 5 V regulator that can deliver more current (800 mA vs 500 mA) and operates to 40 V instead of 36 V. The easiest way to distinguish between the two versions is via the silkscreen on the side of the board opposite the USB connector, where the original version is labelled ac02c and the new version is labelled ac02f. The new version also uses an ENIG finish, so the plating on the exposed copper looks gold, and it has unplated mounting holes.

The A-Star 32U4 ships with a preloaded Arduino-compatible bootloader (which uses 4 KB of flash memory, leaving 28 KB available for the user program). We provide a software add-on that enables the board to be easily programmed from the Arduino environment.

The A-Star 32U4 Mini boards use the same microcontroller as the Arduino Leonardo and Arduino Micro and run at the same frequency, and they are the same size as the Arduino Micro, but they offer a number of advantages over these other ATmega32U4-based boards. Most notably, their efficient switching regulators cover a wide range of input voltages, opening up new possibilities for powering projects built around Arduino-compatible microcontroller boards. Another advantage is the power selection circuit based on the TPS2113A power multiplexer from Texas Instruments, which allows safe, seamless power switching between USB and an external source without losses from passive components like fuses or diodes along with the ability to monitor and control the selected power source. Additionally, the A* 32U4 Mini breaks out a few additional pins from the ATmega32U4 microcontroller that are not exposed on the Arduino Micro or Leonardo, and it features larger, more convenient mounting holes than the Arduino Micro.

This diagram identifies the I/O and power pins on the A-Star 32U4 Mini (even though it shows the ULV version, it applies to all three A-Star Mini boards); it is also available as a printable PDF (269k pdf). For more information about the ATmega32U4 microcontroller and its peripherals, see Microchip’s ATmega32U4 documentation.

The A-Star 32U4 Mini can either be powered directly from the USB 5 V supply or from an external voltage source, which is regulated to 5 V by its onboard regulator, and the board’s power selection circuit enables automatic, uninterrupted transitions between the two power sources. When the A-Star is powered through an external power supply connected to the BAT+ and BAT- pins, its reverse-voltage protection circuit helps prevent it from being damaged by accidentally-reversed power connections, and the VIN pin can be used as an output to supply reverse-protected power to other devices. Alternatively, the external supply can be connected directly between VIN and GND, bypassing the reverse-voltage protection.

The A-Star 32U4 user’s guide discusses the board’s features in more detail.

A pair of 1×17-pin breakaway 0.1″ male headers is included with the A-Star 32U4 Micro, which can be soldered in to use the board with perfboards, breadboards, or 0.1″ female connectors. Also included is a 2×3 header that can be installed to allow external programming of the microcontroller through the AVR ISP interface, such as with our USB AVR programmer. The board has two mounting holes that work with #2 and M2 screws (not included).

The A-Star 32U4 Micro is a part of our larger A-Star family, all of whose members are based on AVR microcontrollers and are preloaded with Arduino-compatible bootloaders. The table below shows some key features and specifications of our A-Star microcontroller boards to help you choose the right one for your application.

1
Without included optional headers. This measurement includes the USB Micro-B connector, which extends 0.05″ past the edge of the PCB.
2
Without included optional headers.
3
Note that 4 KB of the MCU's 32 KB of flash memory is used by the pre-installed USB bootloader. All 32 KB is available when programming via the ISP header rather than the bootloader.
4
For light loads. The regulator's dropout voltage increases approximately linearly with the load, from a few millivolts at no load up to around 0.6 V at 500 mA.
5
Available current depends on input voltage, current consumed by the board, ambient conditions, and regulator topology. See product documentation and performance graphs for details.
6
On Bat+ (LV, SV) or Bat- (ULV).

A-Star 32U4 Arduino library
The AStar32U4 library for the Arduino IDE helps interface with the on-board hardware on the A-Star 32U4 controllers.
AStar32U4 library documentation
A-Star repository on GitHub
This repository contains Arduino add-on files, Windows drivers, and bootloaders for the A-Star 328PB, A-Star 32U4, and the rest of our 32U4 family of boards.
Arduino Software
Arduino integrated development environment (IDE) software
ATmega32U4 documentation
Microchip’s product page for the ATmega32U4 AVR microcontroller, with links to its datasheet, application notes, and other resources.
AVR Libc Home Page
The web site for AVR Libc, which is the standard library of functions that you can use with C and C++ on the AVR.
Pololu A-Star and Orangutan Forum Section
The A-Star and Orangutan discussion section of the Pololu Robotics Forum.
AVR Freaks
AVR community with forums, projects, and AVR news.
AVRDUDE
AVRDUDE is a cross-platform command-line utility for programming the flash memory on AVR microcontrollers.
LUFA – the Lightweight USB Framework for AVRs
LUFA is an embedded software library written in C that can be used to create USB applications on USB-capable AVRs. It comes with a large library of example USB applications and bootloaders.
Atmel Studio 7
Free integrated development environment (IDE) for AVRs.
WinAVR
A free, open-source suite of development tools for the AVR family of microcontrollers, including the GNU GCC compiler for C/C++.
LPS Arduino library
This is a library for the Arduino that interfaces with our LPS25H and LPS331AP pressure/altitude sensor carriers as well as the pressure sensor on the AltIMU-10 v3 (it also works with the original AltIMU-10). It makes it simple to read the raw pressure data from the sensor, and it provides functions to help calculate altitude based on the measured pressure.
Arduino library for addressable RGB LED strips from Pololu