This programmable module combines with a Raspberry Pi to serve as the control centre of a small robot or electronics project. 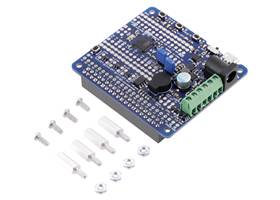 Typical efficiency of the 5 V regulator on the ...

The A-Star 32U4 Robot Controller LV with Raspberry Pi Bridge is a programmable module well-suited for robotics applications, designed to work either as an auxiliary controller mounted to a Raspberry Pi or as a standalone control solution for a small robot. This A-Star (abbreviated A*) is based on Atmel’s ATmega32U4 AVR microcontroller, which has built-in USB functionality, and it ships with a preloaded Arduino-compatible bootloader. Its complement of peripheral hardware includes dual motor drivers capable of delivering a continuous 1.8 A per channel, along with pushbuttons, LEDs, and an optional buzzer for building a user interface. An efficient switching voltage regulator allows the controller to work over a wide range of input voltages (2.7 V to 11 V).

The robot controller board conforms to the Raspberry Pi HAT specification, allowing it to be used as an add-on for a Raspberry Pi with a 40-pin GPIO header (Model B+, Model A+, Pi 2 Model B, or Pi 3 Model B). On-board level shifters make it easy to set up I²C communication and interface other signals between the two controllers, and the A-Star automatically supplies 5 V power to an attached Raspberry Pi. In this setup, the Raspberry Pi can handle the high-level robot control while relying on the A-Star for low-level tasks like reading analogue sensors and controlling timing-sensitive devices (e.g. servos).

We provide a library that helps establish communication between the A-Star and a Raspberry Pi, as well as a tutorial that demonstrates how to use the library and its included example code to build such a robot.

This version of the A-Star 32U4 Robot Controller LV with Raspberry Pi Bridge (2.7 V to 11 V input voltage) is assembled with selected through-hole connectors and components for use as a Raspberry Pi expansion board, as shown in the picture above. A 2×20-pin 0.1″ female header is preinstalled to serve as a Raspberry Pi GPIO connector, and a 6-pin strip of terminal blocks and a DC power jack are mounted for motor and power connections. A buzzer is also installed, along with two 2×1-pin male headers and shorting blocks for the buzzer and battery level jumpers.

This version ships with a set of four M2.5 standoffs (11 mm length), screws, and nuts that can be used to secure the board to the Raspberry Pi at the proper height for the GPIO connector.

For a version with SMT components only, making it more suitable for standalone use and allowing customisation of through-hole components, see item #3116. For example, if you want to continue to have access to the Raspberry Pi’s 40 GPIO pins while the A-Star is plugged in, you can get the SMT-only version and install a stackable 2×20-pin female header.

A major feature of the A* Robot Controller LV is its power system, which allows it to efficiently operate from a 2.7 V to 11 V external source and provide power to an attached Raspberry Pi. The input voltage is regulated to 5 V by a TPS63061 switching step-up/step-down (buck-boost) converter from Texas Instruments. (We also make a standalone regulator based on this integrated circuit.) The regulator’s flexibility in input voltage is especially well-suited for battery-powered applications in which the battery voltage begins above 5 V and drops below 5 V as the battery discharges. Without the typical restriction on the battery voltage staying above 5 V throughout its life, a wider range of battery types can be considered. For example:

As shown in the left graph below, the LV’s 5 V switching regulator has an efficiency – defined as (Power out)/(Power in) – of 80% to 90% for most combinations of input voltage and load.

The A-Star’s components, including the microcontroller and LEDs, draw 30 mA to 40 mA in typical applications (without the buzzer). The rest of the regulator’s achievable output current, which depends on input voltage as well as ambient conditions, can be used to power other devices; this can include an attached Raspberry Pi (which typically draws a few hundred milliamps). The blue line in the right graph above shows output currents at which the voltage regulator’s over-temperature protection typically kicks in after a few seconds. These currents represent the limit of the regulator’s capability and cannot be sustained for long periods; under typical operating conditions, a safe limit for the maximum continuous regulator output current is 60% to 70% of the values shown in the graph.

Like our other A-Star 32U4 programmable controllers, the A-Star 32U4 Robot Controller ships with a preloaded Arduino-compatible bootloader (which uses 4 KB of flash memory, leaving 28 KB available for the user program). We provide a software add-on that enables the board to be easily programmed from the Arduino environment and an Arduino library to make it easy to use the additional on-board hardware.

The A-Star 32U4 Robot Controller has the same microcontroller as the Arduino Leonardo and Arduino Micro, and it runs at the same frequency, so most code examples intended for those boards should also work on the A-Star.

The A-Star 32U4 Robot Controller is a part of our larger A-Star 32U4 family, all of whose members are based on the same ATmega32U4 microcontroller, feature native USB interfaces, and are preloaded with Arduino-compatible bootloaders. The table below shows some key features and specifications of our A-Star microcontroller boards to help you choose the right one for your application.

1
Without included mounting hardware.
2
Note that 4 KB of the MCU's 32 KB of flash memory is used by the pre-installed USB bootloader. All 32 KB is available when programming via the ISP header rather than the bootloader.
3
Some I/O lines are used by on-board hardware.
4
Available current depends on input voltage, current consumed by the board, ambient conditions, and regulator topology. See product documentation and performance graphs for details.

User’s manual for the Pololu A-Star 32U4 Robot Controller with Raspberry Pi Bridge.

A-Star 32U4 Arduino library
The AStar32U4 library for the Arduino IDE helps interface with the on-board hardware on the A-Star 32U4 controllers.
AStar32U4 library documentation
Documentation for the AStar32U4 Arduino library.
A-Star/Zumo 32U4 repository on GitHub
This repository contains the A-Star Arduino add-on files, the Windows drivers, and the source code of the bootloader, as well as the AStar32U4Prime library and the Zumo32U4 library.
Raspberry Pi slave library for Arduino
This is an Arduino library that helps establish I²C communication between an A-Star 32U4 Robot Controller and a Raspberry Pi, with the Arduino acting as the I²C slave. Example Arduino code and Python code for the Raspberry Pi are included.
Building a Raspberry Pi robot with the A-Star 32U4 Robot Controller
This blog post shows how to build an expandable robot platform based on a Raspberry Pi and an A-Star 32U4 Robot Controller using our Raspberry Pi slave library for Arduino.
Arduino Software
Arduino integrated development environment (IDE) software
ATmega32U4 documentation
Atmel’s product page for the ATmega32U4, with links to its datasheet and other resources.
AVR Libc Home Page
The web site for AVR Libc, which is the standard library of functions that you can use with C and C++ on the AVR.
Pololu A-Star and Orangutan Forum Section
The A-Star and Orangutan discussion section of the Pololu Robotics Forum.
AVR Freaks
AVR community with forums, projects, and AVR news.
AVRDUDE
AVRDUDE is a cross-platform command-line utility for programming the flash memory on AVR microcontrollers.
LUFA – the Lightweight USB Framework for AVRs
LUFA is an embedded software library written in C that can be used to create USB applications on USB-capable AVRs. It comes with a large library of example USB applications and bootloaders.
Atmel Studio
Atmel’s free integrated development environment (IDE) for AVRs.
WinAVR
A free, open-source suite of development tools for the AVR family of microcontrollers, including the GNU GCC compiler for C/C++.