The Pololu Zumo 32U4 robot is a versatile tracked robot based on the Arduino-compatible ATmega32U4 MCU, and this kit contains most of the parts you need to build one—all you need to add are a pair of micro metal gearmotors and four AA batteries . 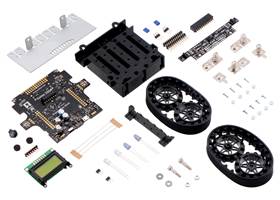 Zumo 32U4 robot main board

This version of the Zumo 32U4 robot (item #3124) is a kit; assembly (including soldering) is required. Motors and batteries are sold separately. A USB A to Micro-B cable (not included) is required for programming.

New blade! As of August 27, 2015, we are shipping these kits with a new blade style (as shown in the kit contents picture below). Unlike the previous blade, which shipped flat, this version has its chassis mounting tabs pre-bent to the appropriate angle. It also features cutouts around the general-purpose mounting holes, allowing them to be bent to different angles if the application calls for it (e.g. to tilt the proximity sensor emitters up or down).

With the exception of motors, batteries, and a USB A to Micro-B cable, this kit contains everything necessary to build and operate a Zumo 32U4 robot:

The Zumo chassis uses two micro metal gearmotors, one for each tread. The ideal motors for your robot depend on your desired torque, speed, and current draw, so motors are not included with the kit version of the chassis (motors are included with the assembled versions of the Zumo 32U4 robot). We generally recommend using high-power (HP or HPCB, which have long-life carbon brushes) versions of our micro metal gearmotors since the tracks require a decent amount of torque to move effectively; higher gear ratios of the non-HP motors might work if you want lower current draw, but they will be slower and offer less control. Specifically, we primarily recommend the 50:1, 75:1, or 100:1 HP (or HPCB) motors for use with this chassis, and these are the versions we include in our assembled Zumo 32U4 robot. Additionally, be sure to get a version with extended motor shafts if you want to be able to use the Zumo 32U4’s encoders.