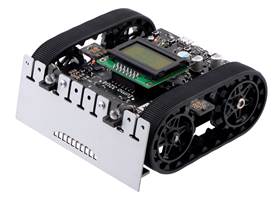 This version of the Zumo 32U4 robot (item #3127) ships fully assembled with a pair of 100:1 HP micro metal gearmotors (with extended motor shafts). As described above, two assembled versions are also available with lower gear ratios (so they are both faster but cannot deliver as much torque).