This shield makes it easy to build an Arduino-controlled Zumo robot. The shield mounts onto an assembled Zumo chassis , connecting directly to the chassis’s battery terminals and motors, and the Arduino plugs into the shield, face down. 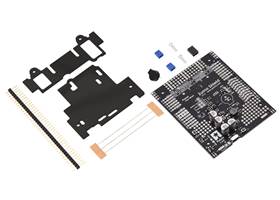 Main features of the Zumo Shield for Arduino, v...

Assembled Zumo Robot for Arduino with an Arduin...

Assembled Zumo Robot for Arduino with an Arduin...

The Zumo Shield is designed specifically to be a convenient interface between a Zumo chassis and an A-Star 32U4 Prime, Arduino Uno, or Arduino Leonardo. The shield mounts directly to the chassis, connecting to its battery terminals and motors, and the A-Star Prime or Arduino plugs into the shield’s male header pins, face down. The shield provides all the electronics necessary to power the motors and includes some additional fun components for making a more interesting robot, such as a buzzer for making sounds, and a 3-axis accelerometer, compass, and gyroscope for sensing impacts and tracking orientation.

With the Zumo Shield and an Arduino (or compatible board like the A-Star Prime), the Zumo chassis becomes a low-profile, Arduino-controlled tracked robot that is less than 10 cm on each side (small enough to qualify for Mini-Sumo competitions). It works with a variety of micro metal gearmotors to allow for a customisable combination of torque and speed, and a stainless steel sumo blade is available for applications that involve pushing around other objects. Arduino libraries and sample sketches are available for quickly getting a Zumo robot up and running.

This is the v1.3 version of the Zumo Shield. It uses an LSM6DS33 accelerometer and gyro and an LIS3MDL magnetometer, replacing the LSM303D and L3GD20H sensors on the previous v1.2 revision. You can use our updated Zumo Shield Arduino library to help you write code that will work with the inertial sensors on any revision.

In addition, the power switch and pushbuttons on the v1.3 shield are surface-mount components instead of through-hole parts like those on the v1.2 version.

Main features of the Zumo Shield for Arduino, v1.3.

The Zumo Shield ships with all of the components required for shield assembly, as shown in the main product picture. Note that soldering is required; please see the user’s guide for detailed assembly instructions. This shield does not include motors or the Zumo chassis itself, though it is available as part of a Zumo Robot kit for Arduino that includes everything you need to build your Zumo robot except motors, an Arduino, and batteries. If you just want a robot that is already put together, we also sell a fully assembled Zumo Robot for Arduino – just add batteries and an Arduino or A-Star Prime and it is ready to go.

To use this shield you will need a few additional parts:

Comparison with the Zumo 32U4 robot

The newer Zumo 32U4 is another robot based on the Zumo chassis. It is a more highly integrated robot than the Zumo robot for Arduino, with enhancements that include a built-in Arduino-compatible ATmega32U4 microcontroller (the same one used in the Arduino Leonardo and A-Star 32U4 boards), an LCD, encoders for closed-loop motor control, and proximity sensors for obstacle detection. The Zumo 32U4 main board effectively combines the functions of the Zumo Shield and the separate Arduino controller into a single, compact board that is just as easy to program as a standard Arduino or A-Star thanks to its USB interface and preloaded Arduino-compatible bootloader.

User’s manual for the Pololu Zumo Shield for Arduino.

Zumo Shield Arduino library
This library and examples for Arduino-compatible boards makes it easy to program an Arduino-controlled robot built with Pololu’s Zumo Shield or Zumo robot kit (also available fully assembled).
Simulink Library for Zumo Robot
This library can be used to program an Arduino-controlled Zumo through MATLAB and Simulink. It provides driver blocks for all the sensors present on the Zumo Robot as well as example models showing their usage.
How to program a Zumo robot with Simulink
This tutorial on the Adafruit Learning System guides you through the process of programming a Zumo robot with Simulink.
Pixy Pet Robot tutorial: adding colour vision to the Zumo Robot for Arduino with a Pixy CMUCam-5
This tutorial from Adafruit shows how to pair a Pixy CMUCam-5 vision system with the Zumo Robot for Arduino to enable it to chase objects or follow you around.
Zumo robot tuning tips
This article was written by Professor Erich Styger for his class on embedded systems programming at the Lucerne University of Applied Sciences and Arts. It describes various ways to tweak the performance of a Zumo to be more competitive in a Mini Sumo competition. Note that his Zumos use a custom PCB rather than our Zumo shield for Arduino; our shield has a lot of capacitance in parallel with the batteries that generally prevents the “battery inertia” problem Erich describes.
Freedom Zumo Robot
This robot is uses our Zumo robot kit, 75:1 micro metal gearmotors, and a Zumo reflectance sensor array. Instead of an Arduino it uses a Freescale FRDM-KL25Z as the microcontroller board, and sample code is available for line following and maze solving. By Erich, March 2013.
Texas Instruments DRV8835 motor driver datasheet