These lightweight aluminium brackets make it easy to mount and integrate the Sharp GP2Y0A02, GP2Y0A21, and GP2Y0A41 Distance Sensors into your project. The brackets are strong enough to hold their position, but they can also be bent by hand to different angles if the application calls for it. 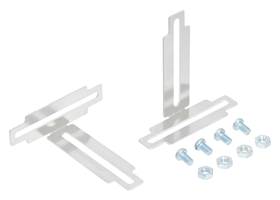 Sharp GP2Y0A21 Distance Sensor mounted in a per...

These lightweight brackets are made from 0.8mm-thick aluminium and are specifically designed to work with Sharp’s analogue GP2Y0A02, GP2Y0A21, and GP2Y0A41 distance sensors. Three versions are available: compact perpendicular and parallel versions, and a slightly larger but more versatile multi-option version that allows for mounting the sensor in either orientation along with greater flexibility in sensor placement relative to the mounting surface.

The brackets are strong enough to hold their default 90° bend, but they can be bent by hand to different angles if the application calls for it.

Example of the Bracket for Sharp GP2Y0A02, GP2Y0A21, and GP2Y0A41 Distance Sensor – Perpendicular bent to a different angle

The brackets are sold in pairs, and four M3×5mm screws and nuts are included (two for each bracket) for securing the sensors to the brackets. The other side of each bracket has mounting options intended for use with #4 or M3 screws.

The following diagram shows the dimensions for the multi-option bracket and is also available as a downloadable PDF (74k pdf).

1
For a single bracket only (no screws or nuts).