The A-Star 32U4 Prime LV is a programmable board based on Atmel’s ATmega32U4 microcontroller and arranged in the common Arduino form factor. 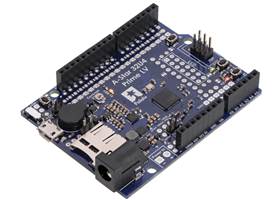 Typical efficiency of the 5 V regulator on...

Side-by-side comparison of the A-Star 32U4 Prim...

The Pololu A-Star 32U4 Prime is a general-purpose programmable board based on Atmel’s ATmega32U4 AVR microcontroller and arranged in the common Arduino form factor exemplified by the Uno R3 and Leonardo. As such, the A-Star Prime (abbreviated A* Prime) is compatible with many Arduino shields, including all of the Arduino shields we carry. All 26 of the microcontroller’s GPIO lines are accessible on the board, including seven than can be used as PWM outputs and twelve that can be used as analogue inputs. The ATmega32U4 is capable of native full-speed USB, which makes it more versatile than similar boards that rely on USB-to-serial adapters: in addition to supporting a virtual (CDC) serial/COM port interface, the A-Star can appear to a connected computer as a mouse and keyboard. The A-Star’s USB interface can be accessed through its USB Micro-B connector.

The A* Prime supports the on-board microcontroller with many additional features and improvements over competing products, including enhanced connectivity and superior power management. The Prime is available in two main versions: LV, which features a blue solder mask and a step-up/step-down voltage regulator that allows operation from 2.7 V to 11.8 V, and SV, which features a green solder mask and a switching step-down regulator that allows operation from 5 V to 36 V. Each version is available in several different configurations: with or without preinstalled through-hole components like standard Arduino female headers and with or without microSD support. There is also a configuration available for each version with an 8×2 character LCD.

We carry an A-Star Prime accessory pack that contains an assortment of parts you might want when assembling the configurations without preinstalled headers (items #3105, #3106, #3111, and #3112).

This configuration of the A-Star 32U4 Prime LV includes microSD support and is assembled with through-hole components as shown in the picture above so that all the basic features can be used without any additional soldering. The standard female headers common to many Arduinos are preinstalled, as is the 2×3 male ISP header, buzzer, DC power jack, and shorting block headers for enabling the microSD hardware, buzzer, and battery voltage monitor. This is the LV version of the A-Star Prime, which operates from 2.7 V to 11.8 V.

A major feature of the A* Prime LV is its power system, which allows it to efficiently operate from a 2.7 V to 11.8 V external source. Like on the smaller A-Star 32U4 Mini LV, the input voltage is regulated to 5 V by a TPS63061 switching step-up/step-down (buck-boost) converter from Texas Instruments. (We also make a standalone regulator based on this integrated circuit.) The regulator’s flexibility in input voltage is especially well-suited for battery-powered applications in which the battery voltage begins above 5 V and drops below 5 V as the battery discharges. Without the typical restriction on the battery voltage staying above 5 V throughout its life, a wider range of battery types can be considered. For example:

As shown in the left graph below, the LV’s 5 V switching regulator has an efficiency – defined as (Power out)/(Power in) – of 80% to 90% for most combinations of input voltage and load.

The A-Star’s components, including the microcontroller and LEDs, draw 30 mA to 40 mA in typical applications (without the buzzer, microSD card, or an LCD). The rest of the regulator’s achievable output current, which depends on input voltage as well as ambient conditions, can be used to power other devices. The blue line in the right graph above shows output currents at which the voltage regulator’s over-temperature protection typically kicks in after a few seconds. These currents represent the limit of the regulator’s capability and cannot be sustained for long periods; under typical operating conditions, a safe limit for the maximum continuous regulator output current is 60% to 70% of the values shown in the graph.

The A-Star 32U4 Prime ships with a preloaded Arduino-compatible bootloader (which uses 4 KB of flash memory, leaving 28 KB available for the user program). We provide a software add-on that enables the board to be easily programmed from the Arduino environment and an Arduino library to make it easy to use the additional on-board hardware. The A-Star 32U4 has the same microcontroller and form factor as the Arduino Leonardo, and it runs at the same frequency, so we generally expect it to work with shields that are compatible with the Leonardo and similar boards. Note that the Prime has additional components and connection points, so you should make sure these do not physically interfere with any shield you are considering using. The following table shows how the Prime compares to the Leonardo and Uno:

From top to bottom: A-Star 32U4 Micro, Mini SV, and Prime LV

The A-Star 32U4 Prime is a part of our larger A-Star 32U4 family, all of whose members are based on the same ATmega32U4 microcontroller, feature native USB interfaces, and are preloaded with Arduino-compatible bootloaders. The table below shows some key features and specifications of our A-Star microcontroller boards to help you choose the right one for your application.

1
Note that 4 KB of the MCU's 32 KB of flash memory is used by the pre-installed USB bootloader. All 32 KB is available when programming via the ISP header rather than the bootloader.
2
Available current depends on input voltage, current consumed by the board, ambient conditions, and regulator topology. See product documentation and performance graphs for details.