The Raspberry Pi is a credit card-sized computer with an ARM processor that can run Linux. This item is the Raspberry Pi 2 Model B , which has 1 GB of RAM, an Ethernet port, HDMI output, audio output, RCA composite video output (through the 3.5 mm jack), four USB ports, and 0.1″-spaced pins that... 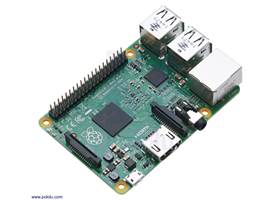 The Raspberry Pi is a credit card-sized computer. The Raspberry Pi 2 Model B is the second generation Raspberry Pi. It is based on the BCM2836 system-on-chip (SoC), which includes an quad-core ARM Cortex-A7 processor and a powerful GPU. The Raspberry Pi supports various distributions of Linux including Debian, Fedora, and Arch Linux.

The Raspberry Pi was designed by the Raspberry Pi Foundation in order to provide an affordable platform for experimentation and education in computer programming. The Raspberry Pi can be used for many of the things that a normal desktop PC does, including word-processing, spreadsheets, high-definition video, games, and programming. USB devices such as keyboards and mice can be connected via the board’s four USB ports. Over five million Raspberry Pis have been sold, and lots of resources for the Raspberry Pi are available online.

The Raspberry Pi 2 Model B has the same form factor and connector locations as the older Raspberry Pi Model B+ and the newer Raspberry Pi 3 Model B. It has an ARMv7 processor, which means it can run the full range of ARM GNU/Linux distributions, including Snappy Ubuntu Core, as well as Microsoft Windows 10.

You might also consider getting a case to house and protect your Raspberry Pi, such as the Translucent Enclosure for Raspberry Pi B+, 2 B, and 3 B.

Technical, help and resource documents for the Raspberry Pi
This listing of useful resources from the Raspberry Pi foundation includes a quick-start guide, tutorials, datasheets, and schematics.
Raspberry Pi Resources
Free resources to teach, learn, and make with Raspberry Pi.
Python library for the Pololu DRV8835 Dual Motor Driver Kit for Raspberry Pi
This Python library for the Raspberry Pi makes it easy to interface with Pololu’s DRV8835 dual motor driver kit and use it to drive a pair of brushed DC motors. An example program is included with the library.
PiBot-B: mobile robot with a Raspberry Pi
This robot uses a Raspberry Pi and Zumo Chassis Kit and can be remotely controlled over WiFi from an iPhone. The page is written in German, but it has a link at the top to translate it into English using Google Translate. We also wrote about the PiBot-B in our blog.
RTIMULib IMU library for embedded Linux systems
RTIMULib, written by richards-tech, is a library for embedded Linux systems designed to make it easy to interface with an IMU and get Kalman-filtered orientation estimates. It works with our MinIMU-9 v3, AltIMU-10 v3, and AltIMU-10 v4 (as well as the older MinIMU-9 v2 and AltIMU-10), and it includes two demo programs that aid in testing and calibrating the sensors. Instructions are provided for setting up RTIMULib on a Raspberry Pi.
Orientation sensing with the Raspberry Pi and MinIMU-9 v2
This project explains how to connect our MinIMU-9 v2 (or AltIMU-10) sensor board to a Raspberry Pi and use it to sense orientation. It includes a video, wiring instructions, and code.
Raspberry Pi – Real Time Control via Android HTML5
Demo code to do web-based real time control of the Pololu Micro Maestro 6 channel servo controller using the Raspberry Pi and the Tornado web server. By MartinSant, November 2012.
Raspberry Pi Telepresence Rover
This tank rover streams video to and can be controlled from a web browser. All rover functions are controlled directly by the Raspberry Pi with no additional microcontrollers. It uses our Pololu 30T Track Set, idler wheels, 150:1 Micro Metal Gearmotor MP, DRV8835 Dual Motor Driver Carrier, and Pololu Step-Down Voltage Regulator D15V35F5S3. By Michael Shimniok, April 2013.
Raspberry Pi-based State Poster Project
Emma, a 2nd grader, put together this creative tri-fold poster of Vermont. She uses the Pololu Step-Down Voltage Regulator and a Pololu Pushbutton Power Switch SV. February 2013.
Example LSM303D Python v2 script for Raspberry Pi
This Python v2 example for the Raspberry Pi reads and prints the accelerometer and magnetometer data from the LSM303D 3D Compass and Accelerometer Carrier.