Tamiya’s wall-hugging ladybird is a fun and easy-to-build kit that’s great for new robot enthusiasts, and it can serve as a unique, hackable robot chassis for more advanced users. 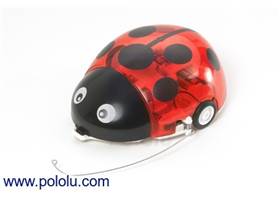 Parts included with the Tamiya 70195 Wall-Huggi...

The wall hugging ladybird squiggles along a wall in a zig-zag manner. When the bump sensor makes contact with the wall, a switch directs power to the left motor, which moves the ladybird to the right and away from the wall. When the bump sensor loses contact, the switch flips and directs power to the right motor, moving the ladybird to the left and towards the wall again. This simple behaviour allows the robot to follow almost any vertical surface on its left.

This is a very easy kit to put together. The electronics—motors, power switch, and bumper switch—are pre-assembled (no soldering is required) and snap into the plastic body with ease. Assembly only takes a few minutes, making this an excellent kit for beginners. The only tool required is a diagonal cutter, though Tamiya also recommends using a modelling knife to remove excess plastic.

Stickers for the black spots and eyes are included, but the black paint that is needed to paint the head as shown in the product picture is not. Tamiya recommends their TS-29 semi gloss black paint, though we got good results just using generic black spray paint for plastics from Home Depot.

Tamiya also makes a wall-hugging mouse which is identical to the ladybird except for cosmetic differences. If you are looking for something that will be a bit more of an assembly challenge, check out Tamiya’s Robocraft Series of small mechanical animals that crawl, jump, or run with the use of gearboxes similar to the ones in the Tamiya gearbox kits.

Because this kit has two independent motors for differential drive, it can also serve as a base for your own project. There is ample space for adding your own electronics, and you can readily modify the plastic base.