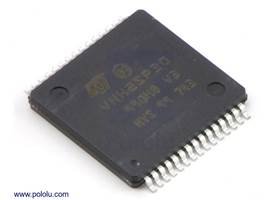 The current-related values in the table below (i.e. the entries to which footnote 3 applies) are the results of tests on only one or two of each driver version, so they do not capture potential unit-to-unit variation, and the tests were conducted with our carrier boards, so they are not necessarily indicative of how the IC will perform by itself or on a different PCB. As such, the values should be treated as rough estimates of performance, not as performance guarantees. While these tests seem to indicate that the VNH2SP30 runs a bit cooler—and hence can deliver more continuous current—than the VNH5019, it is important to note that the three driver versions were tested at different times under potentially different conditions, so the results are not necessarily accurate indications of relative performance.

The motor drivers have maximum current ratings of 30 A continuous. However, the chips by themselves will overheat at lower currents (see table above for an example set of values). The actual current you can deliver will depend on how well you can keep the motor driver cool. Good air flow and a heat sink will allow the chip to operate at currents closer to its maximum rating without overheating.

Many motor controllers or speed controllers can have peak current ratings that are substantially higher than the continuous current rating; this is not the case with these motor drivers, which have a 30 A continuous rating and a over-current protection that can kick in as low as 30 A (45 A typical). Therefore, the stall current of your motor should not be more than 30 A. (Even if you expect to run at a much lower average current, the motor can still draw high currents when it is starting or if you use low duty cycle PWM to keep the average current down.)

Note: This motor driver IC comes in a MultiPowerSO-30 package that requires surface mounting; it is not a through-hole component. Our single and dual carrier boards give you convenient access to the VNH5019 motor drivers without any surface-mount soldering.