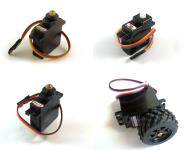 Radio Control RC servos are the actuator of choice for many robotics projects due to their low price and ease of use.

Inside the servo is a motor driver circuit with feedback from a potentiometer. The servo unit adjusts the position of the servo using this feedback to match the signal being sent from a microcontroller or a radio control receiver.

The simplicity is that only three wires are needed. Power, ground and a signal wire and most microcontrollers are capable of sending the correct signal to position servos with one line of code.

Continuous rotation servos are specially designed servos where the feedback loop is ignored and rotation is not stopped mechanically. The result is a motor and motor driver combination that can be controlled just like a servo but now used as a very cheap and easy drive system for wheels or pulleys with full speed and direction control.

Digital and analog servos but have the same motor and potentiometers. Digital servos have more advanced circuitry to analyse the input signal and drive the motor with high frequency PWM to produce faster response, more torque and less dead band. 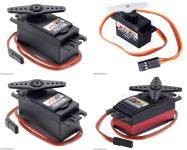 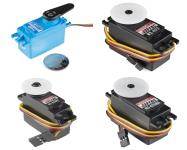 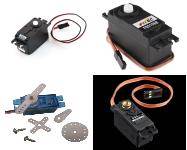 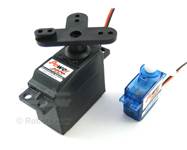