The Arduino Yún (Yun) is an Arduino board based on the ATmega32u4. It also has an Atheros AR9331 chip running an OpenWRT distro named Linino.This enables built-in Ethernet and WiFi support while still within a familiar Arduino environment. Also has a USB-A port, micro-SD card slot and 20 digital input/output pins. 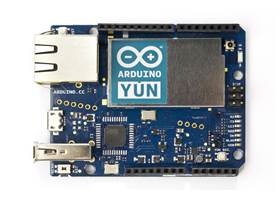 Arduino is an open-source physical computing platform based on a simple i/o board and a development environment that implements the Processing/Wiring language. Arduino can be used to develop stand-alone interactive objects or can be connected to software on your computer (e.g. Flash, Processing, MaxMSP). The open-source IDE can be downloaded for free (currently for Mac OS X, Windows, and Linux).

By combining two separate processor chips on the same board the Arduino Yun is able to be programmed using familiar Arduino tools. The OpenWRT software runs on the Linux microprocessor (Atheros AR9331) and you can talk to it from the ATmega23U4 chip with standard Arduino code. This approach offloads the intensive processing involved in network communications and also picks up some bonus features from the Atheros chip including micro SD card support, USB Type A host, 32 Mb flash.

20 digital input/output pins (of which 7 can be used as PWM outputs and 12 as analog inputs) are available to connect the board to various sensors and other devices. A micro USB connection is available for programming the Arduino chip and also there is an ICSP header and a 3 reset buttons.

Note: The Arduino PoE module will not work with this board.