This Adafruit NeoPixel 1/4-ring contains 15 individually addressable RGB LEDs arranged in a quarter-circle that can all be controlled with a single digital output of a microcontroller. Four of these rings can be connected to form a 60-LED NeoPixel ring with an outer diameter of 6.2″ (158 mm). 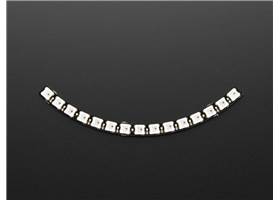 This NeoPixel 1/4-ring from Adafruit contains 15 individually addressable RGB LEDs arranged in a quarter-circle that can all be controlled with a single digital output of a microcontroller and chained together with other rings and WS281x-based LEDs to make larger, more complex displays. When four of these 1/4-circles are connected, they form a complete 60-LED ring with a 6.2″ (158 mm) outer diameter and 5.63″ (142 mm) inner diameter.

The quarter-ring can be controlled by many microcontrollers, but our A-Star 32U4 Micro works particularly well for applications where space is an issue. The lower picture on the right shows an A-Star 32U4 Micro controlling three different sizes of NeoPixel rings. See the Protocol section near the bottom of this page for some things to consider when selecting an appropriate microcontroller.

The quarter-ring has four connection points.

The pin labelled GND is the ground pin, and should be connected to the ground pin of the microcontroller that is controlling the LEDs and also to the negative terminal of the power supply.

The pin labelled 5V is the power input pin, and should be connected to a suitable power supply. An input voltage of 5 V is used to power the quarter-ring, and each LED can draw up to 50 mA at 5 V when outputting white at full brightness. That means the quarter-ring could draw up to a maximum of around 750 mA.

The pin labelled DIN is an input that receives the signal controlling the LEDs. This pin should be connected to a microcontroller output pin or to the signal output pin of a WS281x-based LED product.

The pin labelled DOUT is optional. It can be connected to the data input pin of another WS281x-based LED product in order to form a chain.

In order to form a full 60-LED circle, four of these quarter-rings can be soldered together. When connecting them, we recommend lining up all of the pieces with the pads facing up and then connecting all of their 5V pins and all of their GND pins with solder as shown in the picture above. After that solder only three out of the four connections between DIN and DOUT. The unsoldered DIN pad can then be used as the input for the entire ring. These solder connections are generally sufficient physically hold the pieces together if the ring will not be subjected to much flexing or rough handling.

Wires can be soldered directly to the board. It has no through holes that could be used with header pins, and does not ship with any header pins or connectors.

1
This is the diameter of the full circle formed when four are connected.
2
Measured with all RGB LEDs at maximum brightness (full white). Can vary some from unit to unit.