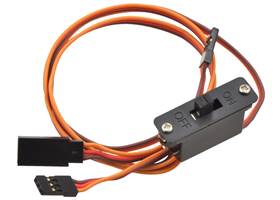 This 3-wire harness can be used to add a toggle switch between any two devices that can be connected with “JR” style servo connectors. One side of the switch has a lead with a female connector, while the other side has two leads, one male and one female.

We sell two versions of this harness:

Note that the RC hobby industry often reverses the convention of “male” and “female” servo connectors: