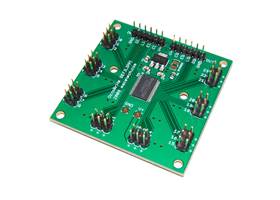 Using an OctoBrite to control the color and bri...

This is a medium-power LED controller for up to 24 independent channels of LEDs (or 8 RGB LEDs), featuring 12-bit digital brightness control with up to 20 mA per channel.

The OctoBrite DEFILIPPI from Macetech is a carrier board for the Texas Instruments TLC5947 24-channel, 12-bit PWM LED driver. This is intended for use with external LEDs or LED modules, such as Macetech’s RGB 003 and 004 satellite modules (which were specifically designed for use with the OctoBrite). Using just three digital output pins and a simple protocol, your microcontroller can control a long chain of OctoBrites. For example, with 8 OctoBrites in a chain, you could control an array of 64 Satellite Modules and set each to any of 68,719,476,736 possible colors, or you could drive an array of 192 individual LEDs, setting each to any of 4096 brightness levels.

The OctoBrite can also be used with the ultra-bright Satellite Module 001, though the OctoBrite is limited to 20 mA per LED channel, so it cannot drive this module at its maximum possible brightness. For a higher-current (150 mA) alternative, see the ShiftBar.

The pinout of the OctoBrite DEFILIPPI module is shown below. As with the ShiftBar and ShiftBrite, signals are sent in to the CI, EI, LI, and DI pins, and these signals are sent out to the CO, EO, LO, and DO pins. Headers are provided for the power connections and the connections to the external LEDs, which should be configured in a common anode (low-side switch) arrangement. Our custom six-conductor cables, available in lengths of 6" and 12" and 24", can be used to easily chain together multiple modules. You can make your own shorter cables with our 3" wires with pre-crimped terminals and our 0.1" 6×1 crimp connector housings.

For further details and example code, please see the instructions in the OctoBrite Documentation. Some similar example code is available on the ShiftBrite page. We also recommend careful reading of the TLC5947 datasheet (1MB pdf).